Just a few notes, triggered by the amazingly informative book by Donald Read, The Power of News: The History of Reuters (Oxford University Press 1992).

Now look at the map of Internet sea cables in 2012.

Second: the issue of volume and density. Reuters was the market leader of its time in the field of news and information distribution, and the company consistently used  (and sometimes created) the most advanced technologies. Yet, the volume of actual words was restricted by factors such as cost-per-sign and the clumsiness of morse code for communicating larger texts. Reuters used a code system by means of which longer phrases could be condensed to one or a handful of words, to be “translated” by Reuters agents at the receiving end of the telegraph line. In 1914, the volumes of words per month sent worldwide was as follows (Read, p.71).

Important stations such as Bombay and Cape Town received a monthly volume of 10,000-12,500 words of “news” (a Bulletin), possibly complemented by a 9,000 word volume of dispatches. This is the volume of two academic papers per month. Less important stations had to rely on a lot less – from a few hundreds of words to a few thousands.

Evidently, this volume (for which receivers paid handsome amounts of subscription money) has been blown away by contemporary social media – this is trivial. Just consider the volumes of daily traffic of just one of the various social media currently available, Twitter. 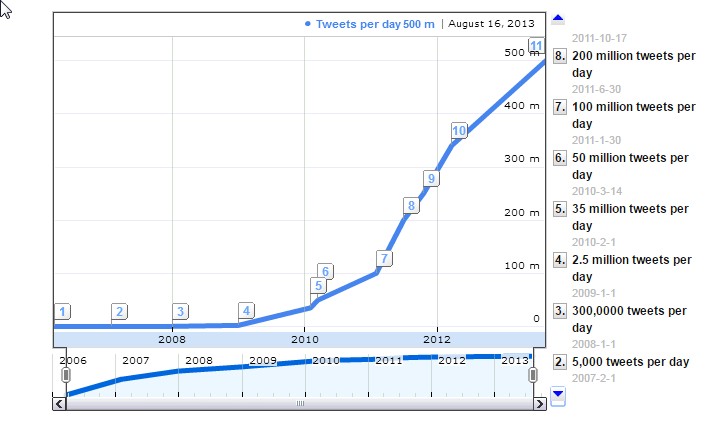 More interesting is to see that the same center-periphery models that were already present over a century ago are simply replicated in the here-and-now. We have seen how the Internet sea cabling patterns mirror those in place by the end of the 19th century. The global Internet traffic map of 2010 confirms this: 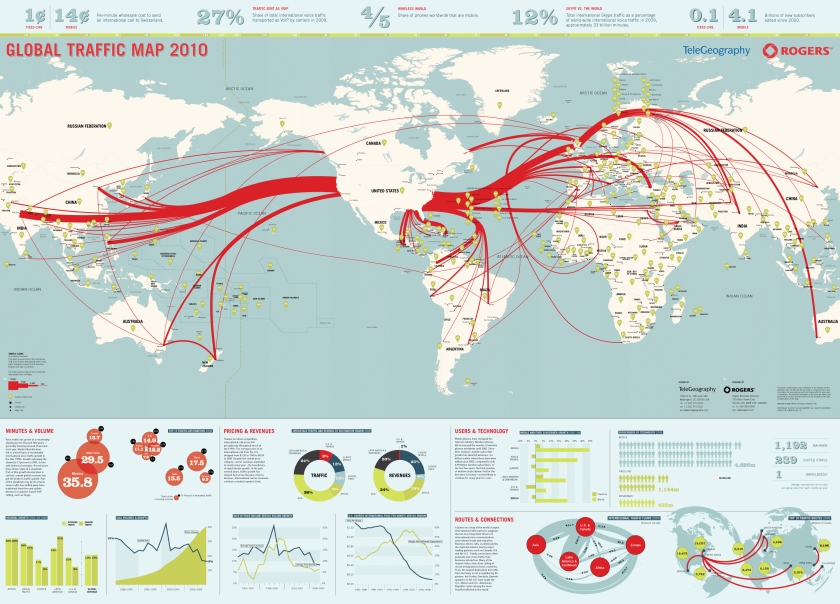 And we can see similar patterns of center and periphery when we look at a map showing us the year in which parts of the globe started using Twitter. I take this map from an interesting source.

The parts of the world that were connected by telegraph cable in the late 19th century join Twitter earlier than the more peripheral parts.

So while speed, volume and density of information distribution have definitely increased during the Internet revolution, these differences are grafted upon old structures and infrastructures, about a century old.