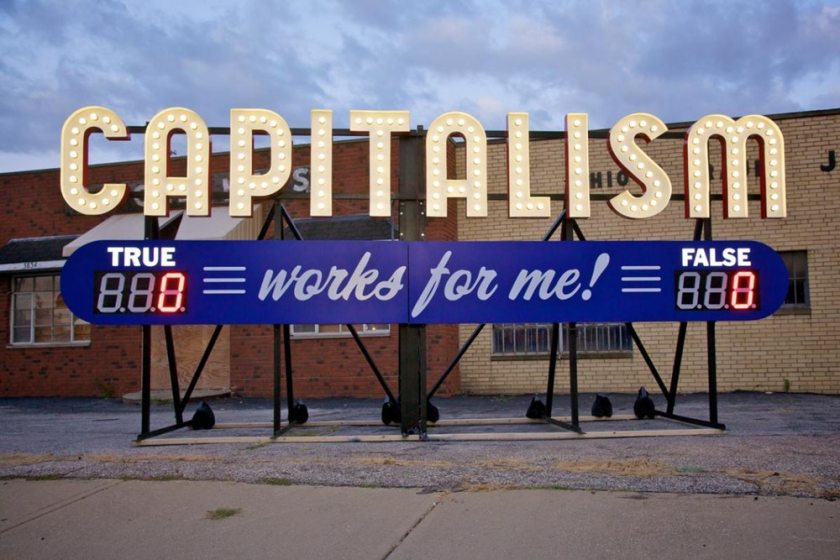 For several years now, the Routledge series Language, Society and Political Economy edited by David Block has consistently turned out interesting studies in which Marx-inflected theoretical frameworks are blended with actual concrete issues in sociolinguistics, discourse analysis and applied linguistics, giving such studies a critical bite along with constant reminders of the power of “big” political-economic issues to seemingly small language-related ones. Chun’s short and elegant study fits well into that tradition. In The discourses of capitalism, we get a thoroughly informed discussion of ideology in the Gramscian tradition combined with an innovative sociolinguistic and discourse-analytic methodology.

In an engaging first chapter, Chun starts from where he must start in Gramsci’s view: a precise and detailed reflection on his own background and social position as someone living in a capitalist system, gradually realizing the ideological nature of something that is presented as simple fact. The latter is usually done by professional economists, but it saturates popular beliefs and perceived experience. And that is the theme of the book: Chun will examine the discourses of “everyday economists” (15). And he will do so by analyzing recorded street interviews with people engaging with a piece of publicly displayed art. The artwork is a large neon-lit construction with the proposition “Capitalism works for me!” designed by artist Steve Lambert and displayed in several cities. Passers-by can vote “true” or “false”, and this, then, is the point of departure for impromptu interviews on capitalism and how such people experience it: its ideological character, the connection with common sense and with Gramsci’s notion of hegemony.

The latter is the topic of chapter 2, which engages at considerable length with the conceptual apparatus guiding the study. How do particular structured ideas become “common sense”? How do they saturate the life world of people, even in the face of manifest factual inconsistencies? How do we explain such obvious contradictions, as the one expressed by a woman who wrote Obama saying “I don’t want government-run health care. I don’t want socialized medicine. And don’t touch my Medicare” (37). This question, obviously, has kept social scientists busy during the entire 20th century. It animated the work of scholars ranging from Durkheim, Weber and Mannheim to Bourdieu, Foucault, Williams and Hall. What Chun brings to this issue – sketched in chapter 3 – is a sophisticated discourse analysis inspired by Bakhtin and – importantly – by the kind of nexus analysis developed by the Scollons. We get a fully “social” form of discourse analysis here.

This methodological instrument is next deployed on powerful empirical material presented in three well-structured empirical chapters. In chapters 4, 5 and 6, we meet the 50 participants from different places whose reactions to “Capitalism works for me!” were recorded by Lambert and his associates and subsequently selected for analysis by Chun. Roughly, three large discourse formats emerge. The first one can be summarized with the proposition “The only system that ever does work” (chapter 4); the second with “Nothing is perfect” and the third with “who gets all the money?”. While the former two can be seen as subscribing to and legitimating capitalism, the last one is counter-hegemonic, or at least strongly critical of the system that has no name.

In the analyses, we begin to see a clear conceptual structure surrounding and underpinning capitalism in the US. It is instantly associated with adjacent concepts such as democracy, freedom, markets, opportunity, choice and individual agency in a master narrative widely known as the American Dream. Capitalism provides a space of freedom and opportunity where individuals (all of them) can “make it” in society by hard work and commitment to freedom and democracy. The latter – in the US as elsewhere – increasingly stands for minimal government and maximum freedom of enterprise. This conceptual structure, one could argue, is the hegemonic US ideology of capitalism. As an economic system it is inextricably woven into a broader view of (wo)man and society, of “the good life”, in ways in which challenging one element (capitalism, e.g.) would involve attacking the others too (“democracy”, “freedom”, etc.). Manifest flaws in capitalist economies (think of the 2008 meltdown) are rationalized as temporary and never beyond repair. And repair is necessary, for “there is no alternative”. This is the apex of hegemony.

Hegemonies, however, produce counter-hegemonies, and chapter 6 engages with those. While respondents in chapters 4 and 5 largely stuck within a range of what we could call “conditional acceptance” of capitalism, respondents in chapter 6 stand out by often pointed and acerbic factual rebuttals of “Capitalism works for me!”. Here Gramsci’s “good sense” (as opposed to “common sense”) comes in: people have done the analytical balancing of lived reality versus commonsensical ideological framing, and reject the latter. The “everyday economists” in this chapter privilege cool facts over dogmatic assumptions and logic over slogans: if my mother works weekdays and weekends for a meager salary while her boss never works during weekends and gets vastly more, what’s fair about capitalism? (cf p 130). This grassroots critique is the hopeful potential discerned by Chun and elaborated in an eloquent concluding chapter 7. Chun (again, in line with the Marxian tradition) calls for a public pedagogy on discourses of capitalism, a mode of public learning and emancipatory education in which ideology is seen as ideology, not as fact or fate.

I find this an engaging and convincing book, offering insights and substance for further reflection in a range of domains. One domain was perhaps not intended by Chun, but I find it particularly inspiring. Chun’s data, as said, were interviews with people passing by and responding to a publicly displayed piece of art, and more in particular a “language object” in Adam Jaworski’s (2015) terms: a publicly shown and highlighted proposition. Seen from that perspective, Chun’s book offers us a fine and sophisticated example of linguistic landscape analysis in which the landscape is used as a prompt to elicit discourses from those inhabiting the landscape. In other words, the linguistic landscape is turned into an interactional site, a nexus of practice according to the Scollons. And this, I suggest, may show us an often-forgotten function and effect of linguistic landscapes: they exist as sites of social interaction, they “talk”, and people “talk back” to them.