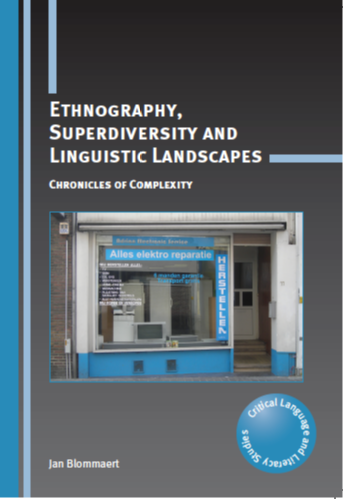 This small book took me about a decade to pull together. Most of that time was spent trying to make sense of rapid change, and finding ways to imagine such rapid change theoretically and methodologically. Theoretical and methodological issues are, at the end of the day, always grounded in empirical problems, and my problem was quite simple: I had seen my own neighborhood continually transforming and had documented such transformations in a large corpus of photos. Every single one of these photos “froze time”, so to speak, in a synchronic representation of signs generating meanings: a status quo forcing descriptive and interpretive work into a synchronic frame which, if left undisturbed, would yield statements such as “my neighborhood is so-and-so”.

This usage of the “ethnographic present” – an atemporal statement, in effect – could never do justice to what I had observed. Social change is not a juxtaposed sequence of synchronies, a diachrony in other words, but a historical dynamic process in which nothing remains static and everything is continuously in motion, pushed on by social factors anchored in concrete timespace. This point was central to The Sociolinguistics of Globalization (2010) and prior to that, in Grassroots Literacy (2008), and the analysis of my own neighborhood was in many ways a sequel to them, an attempt to take the mobility paradigm defined in the earlier books to a concrete set of empirical-descriptive and interpretive problems.

A second advantage was that I had a clear direction ready for the re-engineering work: what was needed was an ethnographic perspective in which signs were seen as traces of historically situated social action, in which the latter brought indexical order and its recognizability effects to signs. And this ethnographic perspective could easily be blended with a complexity-theoretical approach, in which the spatial aggregation of historically and indexically different signs, deriving from different conditions of production and addressing different audiences while being arranged in a simultaneous field of perception, could point to nonlinear, unstable and unfinished structures and stochastic effects. Thus ELLA, Ethnographic Linguistic Landscape Analysis was conceived, and this book represents the first stage in its development (see also Blommaert & Maly 2016).

What I missed in this first stage, was the online dimension of linguistic landscapes: the fact that, increasingly, offline signs in public space contain links, web addresses, QR-codes and other items connecting offline and online sites. Following such online gateways in offline signs brings another perspective on things such as participants, audiences and forms of social action. To give an example: one of the recent evangelical churches in my neighborhood is run by a Nigerian pastor, and is housed in one of the least appealing premises in the area. The services attract just a couple of dozen faithful during the weekends, so the whole enterprise looks rather underwhelming. But when we follow the links on the posters displayed on the church window, we discover a very different reality. The pastor appears to run a YouTube channel with almost 200,000 subscribers, and it features videos viewed up to 100,000 times. He also broadcasts services held in a wide variety of places in Africa, Europe, Asia and North America (Blommaert & Maly 2019a). Thus, we begin to see another aspect of social reality in the neighborhood: the fact that what goes on there is profoundly connected, as a node in a globalized network, with actions, participants and audiences elsewhere. And what looks small and shabby locally can, actually, be just an instance of a big and impressive translocal phenomenon (Blommaert & Maly 2019b).

I overlooked this online dimension of linguistic landscapes and urge readers of this book to include it into their research. I can invoke two excuses or attenuating circumstances explaining this obvious lack in the book. One is the fact that the data I worked on when composing the book did contain very few online pointers. They were not absent, but the full and regular integration of such online features is a more recent phenomenon. The other one is the fact that I wrote this book very much in a dialogue with early Linguistic Landscape Studies, and I adopted the outspoken offline bias of that line of inquiry. Even so, looking back at the book I cannot but be dissatisfied about the absence of a feature which I now consider essential in understanding the patterns of globalization and superdiversity we can “read” off the publicly displayed signs in my neighborhood and elsewhere.

I need to mention another issue, an inevitable one this time, and one I had anticipated and announced when I offered the book to its readers in 2013. Given the fact that I described and analyzed a neighborhood subject to permanent and rapid change, most of the facilities and inscriptions shown in my illustrations are no longer present in the neighborhood. As I explained in the final chapter of the book, the infrastructures of superdiversity are highly flexible, dynamic and volatile, and small changes in the population of the neighborhood have immediate effects on the linguistic landscape. Yet there is no point trying to update the images in the book, for by the time the book is printed, several of these new illustrations will be obsolete as well. In addition, the essence of the book is the opposite of the kind of “snapshot” offered in its illustrations: it is the ethnographic analysis of patterns of change – a sociological and social-semiotic narrative couched in a theoretical and methodological one, the major points of which remain, I believe, relevant. The book is best read as an invitation for new research performed by others and elsewhere. If it continues to inspire scholars and prompt such new research, I can be a happy author.

I am also happy to gratefully acknowledge the input, enthusiasm and efforts of colleagues involved in this Czech edition. I am deeply aware that, in my writings, I offer discursive and conceptual idiosyncrasies that make it hard for me, at times, to explain my own English prose in my native language Dutch. Therefore, I’m not one who views translation of my work as a relatively straightforward conversion of expressions in language A into expressions in language B – it is work that demands substantial intellectual effort, careful calibration and loads of tough decisions. I am deeply grateful to Marian Sloboda and his team at Charles University, and to Ondrej Prochazka, for the great care they gave to this project, which I prefer to call an “edition” rather than a translation.