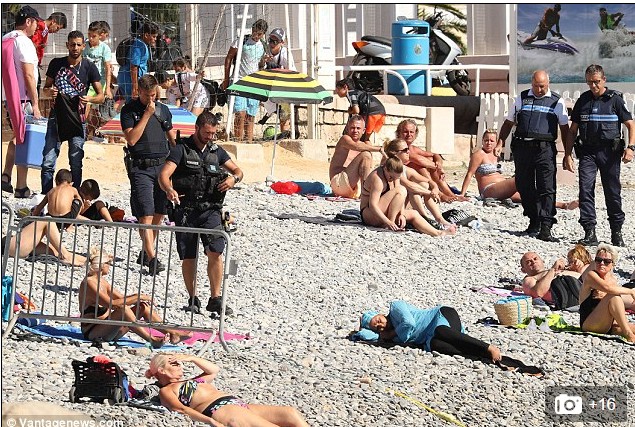 What follows is a sketchy analysis – do try this at home – of a genre that has become extraordinarily widespread in social media debates: antagonistic argumentation revolving around a simple us-versus-them scheme. The example I shall use is that of a Facebook update posted on 15 August 2016. The update was part of a social media storm, erupted after an incident on the beach in Nice, France, where a Muslim woman wearing a so-called “burkini” (in fact, a hijab) was forced by four police men to take her tunic off, and fined 38€ for violation of decency regulations.

This incident triggered massive public and political debate in Belgium, and for days it was the topic on Facebook, both in the narrow sense (“away with the burkini!!”) and in the usual ripple-effect in which any theme related to Islam could lead to statements on every other Islam-related theme. Belgian politicians spoke out on the topic, and the Belgian-Flemish social democrats took a rather repressive position in the discussion. Evidently, this sent a (or better: one more) shock wave through Facebook, and social-democrats were quickly and generously showered by allegations of right-wing anti-immigrant politicking.

On 15 August, a sympathizer of the social-democratis posted this relatively long (and not always quite coherent) update. The original was in Dutch, I translated it.

Suddenly, some think that identifying radicalization is a right-wing thing. Hello! Moment please! Being social doesn’t mean being naïve. One can also naively walk into the lion’s den and believe the animal can be stroked like a pussycat. There is effectively a problem with some [Muslims] in Belgium and their interpretation of Islam. They not just put (soft or hard) pressure on their wives, family, friends; they effectively dictate rules that cannot be reconciled with our laws and human rights, such as fraternity, freedom and equality. Protecting these right is ALSO being social. No matter how sensitive the topic. And the discrimination that unfortunately occurs, the call for respect for Muslims, is no license to dictate the norms and values of Islam, or more precisely, their interpretation thereof. Let alone that non-Muslims would be prohibited from calling into question certain practices, like some in that same community that oppresses women and the social pressure not to just have contact or to marry a Muslim, to make her subordinate, to refuse her to seek a job or to force her to wear a veil. All of this cannot be reconciled with our society, which has known the Enlightenment, something the Middle East urgently needs to understand that a secular state isn’t such a bad idea given the diversity of views, also within one faith, and the negative consequences. It is not because exclamation marks and question marks are put around radicalization and the intolerant attitudes of a group of Muslims in Belgium, that this become a right-wing policy by definition. I have been able to experience myself over the past month how I was prevented by a second-generation Muslim of Belgian nationality, who clearly displayed radicalized traits, from having a conversation with a woman wearing a veil, while the latter had initiated the conversation with me! Such people do not respect our freedoms and democracy, and one must be able to say this and take action regarding this. This has nothing to do with left or right wing, but [a lot] with education and human rights. Being oversensitive now because one points to a problem, and claim that this would be a right-wing reaction, is too crazy for words. It’s not because one is socialist that one has to accept that our norms and values would suddenly be dictated from another corner, and that we once again experience religion like in the 1920, this time not from the Catholic church but by the few who have a very narrow view of Islam. The Muslim community has got a lot of work to do in the way of social control, and the Imam, in particular, should point towards the fact that Islam, too, teaches reconciliation, respect for the fellow human being. That there is no place in the real Islam for violence (including domestic violence), oppression and denying the respect for other people by a lack of respect for their human rights. And most certainly [there is no place for that] in the heart of God and his people.

The general direction of the text is apologetic, of course: the author’s main argument is that there is nothing “right-wing” to being critical of aspects of Islam which he deems in violation of fundamental “norms and values” regulating “our” societies. While developing his apology, however, a consistent us-them scheme is developed. We can, in fact, rewrite the entire text in two colums, one specifying characteristics and actions of “they”, the Muslims, another describing those of “we”, social-democratic Flemish Belgians. Consider the result: 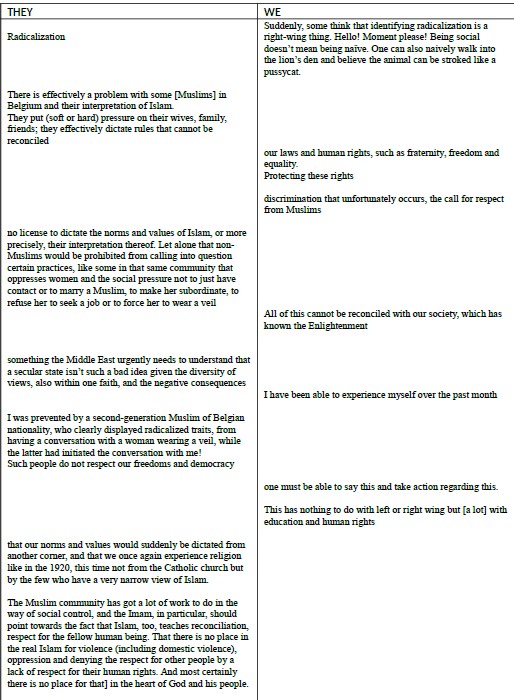 I have done this simple two-column excercise for many years with beginning discourse analysis students, and one can see how productive it is. In the “us” column, we can see

The left-hand column, by contrast, contains

Note some terms around which I put scare quotes here: terms such as “our” (as in “our society”, “our norms and values” etc.) and “radicalized”. The first one is, technically speaking, a shifter, something the actual meaning of which shifts according to context; the second is a degree term expressing a particular level of intensity (compare: “my painting is innovative” – “my painting is very innovative” – “my painting is radically innovative”). None of the terms, thus, are neutral descriptors, if you wish – and thus they are begging the evident question what exactly do you mean by this? The broad lines of a more indepth analysis are now in place.

And so we see an argument which many (certainly its authors) would perceive as making sense, even “correct”, but which is in actual fact quite easy to dislodge. It is a kind of “rationality” that deserves to, and must, be critically addressed at all times. So do try this at home.